The European Commission’s proposed gas market reform and plans for carbon management can equip the EU with a powerful set of solutions to reach climate neutrality. IOGP Europe calls on co-legislators to choose an ambitious, technology inclusive, and affordable pathway to climate neutrality by using natural gas as a transitional fuel and further incentivizing and accelerating the large-scale deployment of low-carbon hydrogen and carbon management solutions such as CCUS.

Alongside other national governments, IOGP Europe sees gas technologies are the second pillar of the transition alongside renewables. By choosing to build the framework for low carbon gases on the solid foundations and achievements of the existing internal gas market and infrastructure in the Commission, the EU can raise its chances of success while reducing the cost of transition to climate neutrality.

“We’re glad to see the Commission looks beyond electrification only and into leveraging the EU gas market it so successfully built. We still believe a stronger push on low-carbon hydrogen deployment is needed to fully exploit its potential” said François-Régis Mouton, Regional Director Europe. “2030 is practically today and 2050 is around the corner, we can no longer afford to be picky with technology deployment. If the EU is really serious about climate neutrality, we need to make the best use of natural gas as a transitional fuel and incentivize the production of all low-carbon hydrogen production methods right now. It’s in the co-legislators’ hands now” Mouton added.

“We agree with the Commission’s approach to establish EU-wide quantification, reporting and verification, and commend its proposal to improve availability and accuracy of international methane emissions data including the establishment of the IMEO” said Mouton. “We do however believe the Commission is overly prescriptive and not risk-based when it comes to leak detection and repair surveys and technologies. We need more flexibility to choose optimal solutions” Mouton added.

The Commission’s Communication on Carbon Cycles marks the long-awaited recognition of carbon management solutions as an integral component of climate neutrality. IOGP Europe echoes the call made by ITRE Committee Chair Cristian Bușoi and the Florence School of Regulation at the 11 October first ‘CCUS Forum’ for the launch of a dedicated CCUS Strategy in Europe in 2022.

“It’s simple: our climate won’t be neutral without Carbon Capture and Storage; experts and policymakers recognize this. It’s time to stop controversies which delay action and start putting carbon back into the ground. CCUS is a safe and proven technology, we need to begin working on deployment solutions immediately. Our industry is committed: there are over 70 existing and planned CCS facilities which could store 60 MtCO₂/year by 2030. Still, we need to deliver about 10 times that by 2030 and around 25 times that by 2050; this is why we need a European Strategy backed by all relevant stakeholders” said François-Régis Mouton. 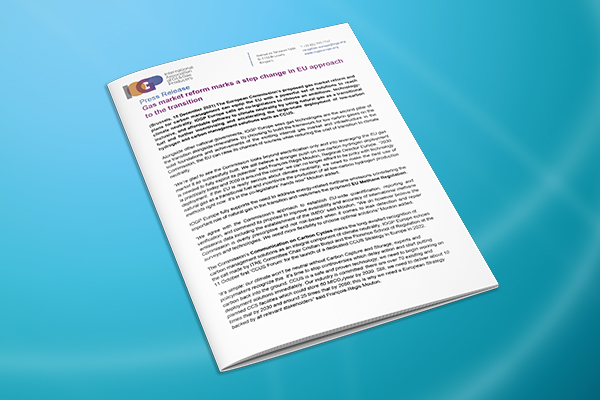