More inclusion needed to be fit for 55

The legislative package proposed by the European Commission includes welcome revisions but ends up laying down a technologically narrow pathway to reach the EU’s 2030 and 2050 climate targets. IOGP believes that the legislative process ahead is an opportunity to take a more inclusive and fact-based approach.

IOGP supports the EU’s 2050 climate neutrality target and calls for an inclusive set of enabling measures to reach it. The European oil & gas industry is actively engaged in all aspects of the transition and has the infrastructure, capital and skills to play an even bigger role going forward.

“To reach climate neutrality by 2050, the EU needs a solid policy framework which is based on facts and brings stakeholders together. We fear some of the proposals would drive an artificial wedge between otherwise complementary solutions” says François-Régis Mouton, Regional Director Europe. “We call on co-legislators to embrace technological diversity and unleash its full potential for the benefit of all Europeans.”

We welcome the Commission’s efforts to mobilize funding for breakthrough low-carbon technologies by doubling the Innovation Fund. The Commission should also be commended for its proposals to account for all CO2 transportation modes in the revised EU ETS Directive, and the introduction of Carbon Contracts for Difference to bridge the gap between the current carbon price and cost of CCUS deployment. This should be followed up by a comprehensive CCUS Strategy with one purpose: to scale up this key technology tenfold by 2030.

IOGP looks forward to the certification of low-carbon “blue” hydrogen in the upcoming Hydrogen and Gas Marked Decarbonisation package as confirmed by Commissioner Simson. We welcome Executive Vice President Timmermans’ call for alternative approaches that can deliver the same result. The Hydrogen for Europe study clearly shows that a climate neutrality pathway allowing low-carbon hydrogen – and therefore CCS – to play their full role would save €2 trillion in investments and limit the impact on European citizens’ energy bills.

In the maritime sector, we call on co-legislators to recognize and secure the growing contribution of LNG in reducing CO2 and air pollutant emissions. In road transport, we deplore the lack of recognition of low-carbon fuels’ role.

IOGP is particularly concerned by provisions which would prevent Member States, industry and citizens from making smart use of natural gas to reduce their carbon footprint on the way to climate neutrality. These include proposals to exclude natural gas investments from the EU ETS Modernisation Fund, and the refusal to acknowledge natural gas-related energy efficiency gains under the Energy Efficiency Directive.

“We regret to see new barriers which would restrict access of industry to large-scale and efficient gas-based solutions, and limit the benefits to Europeans. This would put Europe on a narrow and more expensive pathway which may not be realistic from a technical or economic point of view. We must leave the door open to alternatives than can deliver the same results at a lower cost, while preserving our European way of life” says François-Régis Mouton.

We call on the European Parliament and the Council to use the months ahead to turn this set of proposals into inclusive and fact-based legislation and give everyone an equal opportunity to contribute to the EU’s energy transition. 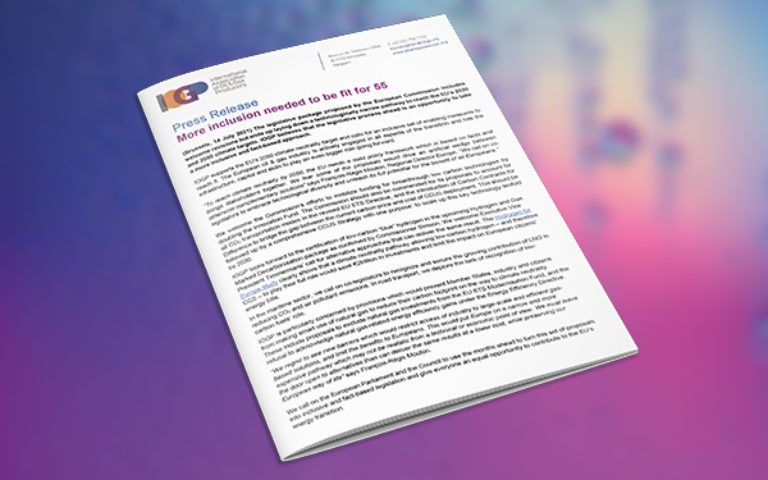