The recognition of domestic gas production’s role in the REPowerEU Plan is an important step that deserves to be followed by a clear and concerted EU-level encouragement to boost natural gas output in the coming decade, as part of a broader objective to enhance Europe’s energy resilience and continue reducing GHG emissions.

“If Europe is serious about strengthening all facets of its energy resilience, the development of natural gas reserves must be valued and pursued alongside that of gas infrastructure and renewables” said François-Régis Mouton, IOGP Regional Director Europe. “In parallel, the EU needs to accelerate the deployment of Carbon Capture Use & Storage (CCUS) and all hydrogen solutions which deliver geopolitical, economic and environmental benefits - the Commission’s proposal to double the Innovation Fund is much welcome in this regard” added Mouton.

Together, the EU and Norway hold 3470 bcm of gas reserves [1], equivalent to 22 years of annual Russian gas supplies. In 2021, the EU produced around 50 bcm of gas per year (100 bcm pre-pandemic in 2019), and Norway around 110 bcm. In addition, Europe’s oil and gas industry is subject to the highest environmental standards in the world and produces gas with a 30% lower GHG footprint than the global average.

In the aftermath of Russia’s invasion of Ukraine, the European oil and gas industry rapidly raised output by deferring routine maintenance where appropriate, prioritizing the extraction of gas over oil, or restarting gas fields. With the right policy framework at EU and national level, this effort could be amplified and sustained while remaining in line with the EU’s 2050 climate neutrality target.

To leverage the full potential of gas reserves as mentioned in the REPowerEU Plan, the EU should:

IOGP Europe and its Members continue supplying the EU with the energy it urgently needs, and stand ready to help strengthen the EU’s strategic autonomy, including through domestic production. 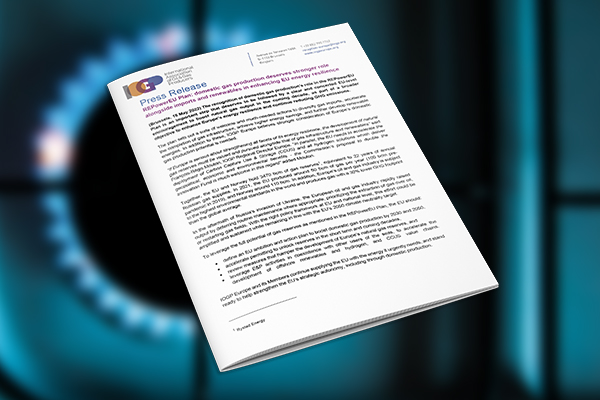